I confess...I couldn't pass this thought up once it popped in my head during my walk.  I'd been pondering past Halloweens AND bullet points are always my style.... 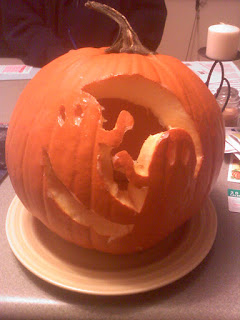 Happy Halloween all!!  I'm told we only get a handful here but I'm still excited. I have silly little window clings that are too small for the big window and Tom will move to the porch.

LOL. Your experiences are so different from mine. We get probably 500 kids at my dad's house, and I'm having serious STRESS over not carving our pumpkin this year. (I'm sick and likely dying and unable to move from bed - but he MUST BE CARVED.) I like that you have the spirit!

We had at most 20, only one of them was under 5. Mostly teenagers. Saddens me since I enjoy answering the door.