And so she continues on her reading and reviewing spree....and struggles with both sleep and the adjustment to a VERY gentle course of physical therapy and trial run at the pool (i.e. first one day of simple float time, then trying to participate as a member of the class as much as feels "right" until my scheduled return to the front 9/1)...

While I can manage my rambling in my professional writing, when it comes to my own blog and my book reviews I can earn my self-imposed "Rambling Blogger" moniker.  That's a warning as I try to provide a bit of context...  I usually summarize the book and then review, but this one seemed to lend itself to a more incorporated style....

Just about 11 months ago, we inherited a cat when my mother-in-law passed.  It was a sad way to get her, but Smoky has brought us much joy and she has our hearts.  I've never been around cats much, but my husband has and we've determined she's often more dog-like than cat-like.  At the very end of May, we agreed to cat-sit for a man being deployed (his brother backed out last minute).  I've watched them interact and move from animosity  to grudging acceptance and sometimes peeks of friendship. After some missteps (Lesson 1, learned after the fact: Don't hold two cats face to face as a means of forced introduction), I read up on cat behavior online and between that and simple observation I become quite fascinated.  I still maintain that "I'm not a cat person, just a Smoky person" but suppose I'll leave room for our "boarder kitty" (as in "room and board" even though she is a passport-carrying gal from Mexico) and they are interesting creatures.  NOT brief!!!  But it could have been MUCH worse!!!

This is how I came to order Cat Sense from a Bas Bleu listing (love the tee below...it's not currently offered so glad I got a regular-wear one and a sleep-friendly larger size when they were on sale!).  Bradshaw is both a cat lover and an animal scientist.  He notes that there is relatively little research on cats and cat behavior, particularly in contrast to the volumes on dogs.  Seeking to help remedy this and using the research of others, his own scientific studies, and his experience as a pet owner, Bradshaw attempts to provide a pretty broad look at cats that basically involves three sections:
Some general observations:  More than once, I was bothered by logical fallacies like "If not X, then Y" and "If we can't prove 'Not Y,' then Y."  There was a LOT of repetition, yet I still got forgetful and the book would benefit from some charts or other graphics and maybe a glossary of some sort.  Overall, the book was fine...it held my interest once I passed the first part, but I don't know that I'd recommend it unless specifically asked about cat history.  Three stars.  And an apology for the crazy length of the review!

This one is tough to explain.

The main character is simply known as A.  She has a roommate, B, who seems determined to become A's double, even cutting off her long braid and then handing it to A to keep. A tells us B has food issues, yet we rarely see A eat a bite. A is dating C.  She likes him because he feels simple.

The world they live in is similar to ours but also more extreme.  Consumerism is even more rampant in their land than ours.  In their world, one of the most popular tv shows tests a couple's relationship including a round that involves trying to pick the other out of a crowd of naked people in the dark.  The couple agree to a complete dissolution of the relationship if they don't succeed in all the tests.  A man becomes famous for buying veal.  And there's a phenomenon involving disappearing fathers who pop back up utterly befuddled, sometimes having managed to construct a new family. Wally's World is a store that sort of resembles our megastores but they rearrange the contents constantly so you can't find things without a hunt (workers wear crazy masks and don't really help).  Oh, and there's a strange snack cake known mostly for its ads that resemble an old-school Roadrunner cartoon.

And then it gets weird....or, more accurately, weirder...One day, A watches as the family across the street disappears one day, all three dressed in white sheets (think ghost costume, not KKK).  There's only so much one can say here without saying too much, but much of the book revolves around a cult-like group that attempts to live in opposition to most of the world around them.  Food is a big issue, as are bodies, but the cult also helps raise much more general questions of identity, culture, and alienation.

There's not a ton I can say in the "review" part of this review.  I feel like I probably missed a lot, although the lack of clear ideas/ideals is probably part of the point.  I simply didn't enjoy this book.  I kept hoping it would turn a corner but it never did.  I managed to finish, but I feel like it took more out of me than it gave back.  I felt like I should be thinking and feeling and reflecting and more, but I was just waiting to be done.

Two stars....there are some amazing sentences and some impressive word-craft.  It'll be taught in some class that mixed sociology, philosophy, and literature someday.  And a few will love it, but I suspect most will be hunting for Cliff Notes.  I got my copy from the publisher (and appreciate it even if it wasn't a win!)....it is probably quite apparent that they put no constraints on my review and that this is an honest and unbiased review.

On another note, I have a regular-wear and a sleep-wear version of this tee.  Super soft and totally on-point for me...Bas Bleu seems to have it shelved at the moment, but I suspect it'll reappear in time.

(Note: if they do restock and you want one, buy a size up from what you suspect you need.) 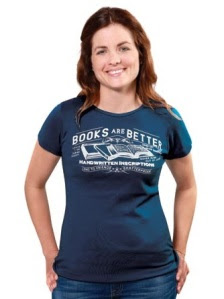 Posted by The Rambling Blogger at 12:53 AM No comments: